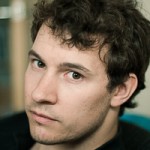 Joel Baldwin is a composer based in Cardiff. He specialises in collaborative projects for the stage. Joel often incorporates elements of visual art into his work and has explored the relationship of music, multimedia and electronics within various performance contexts.

Over recent years, he has been commissioned to write a number of interdisciplinary stage works: an opera based on a John McGahern short story, The Beginning of an Idea, for the University of Oxford’s Faculty of Music; a ‘vocalic opera’ for four voices, ensemble and electronics for Konscht Maschinn; a multilingual monodrama with film and dancers for DANSOX; and a setting of poems on fungi for soprano and ensemble (upcoming). He will have a series of works performed in concerts scheduled to take place in Oxford and Cardiff in 2022 as well as two new opera premieres in 2023.

After completing a Master’s degree in Composition at The Royal College of Music with Jonathan Cole, Joel read for a DPhil in Music at the University of Oxford under the supervision of Martyn Harry and Gascia Ouzounian. He has written works for Ensemble Klang, Villiers Quartet, CHROMA, Explore Ensemble, ANIMA, RCM Orchestra, Composers’ Ensemble, Masters’ Ensemble, and many other groups and soloists. If you’d like to find out more—or to collaborate—please get in touch.